Huawei today presented a special award to Turkish professor Dr. Erdal Arikan, the inventor of polar codes for 5G, in recognition of his outstanding contribution to the development of communications technology. At the ceremony, held at Huawei’s global headquarters in Shenzhen, the company also honored more than 100 Huawei scientists and engineers who are working on standards and basic research.

Basic research is key to industry development. Theoretical breakthroughs, often made after decades of focused scientific effort, help set the direction of technological progress. With 5G just on the horizon, the paper on polar codes that Professor Arikan published in 2008 defined an entirely new approach to maximizing the rate and reliability of data transmission. Polar codes are the world’s first channel coding scheme to bring us up against the threshold of Shannon’s limit, or the maximum rate that data can be sent with zero error at a particular bandwidth. Polar codes significantly improve coding performance for 5G. At the same time, they reduce the complexity of design and ensure service quality. In 2016, 3GPP (the international standards body responsible for 5G standards) adopted polar codes as the official coding scheme for the control channels of 5G New Radio (NR) eMBB interface.

At the awards ceremony, Huawei founder Mr. Ren Zhengfei presented a medal to Professor Arikan. The medal, designed and manufactured by the Monnaie de Paris (Paris Mint), features an engraving of the Goddess of Victory with a red Baccarat crystal, symbolizing the importance of new communications technology in leading the world forward. 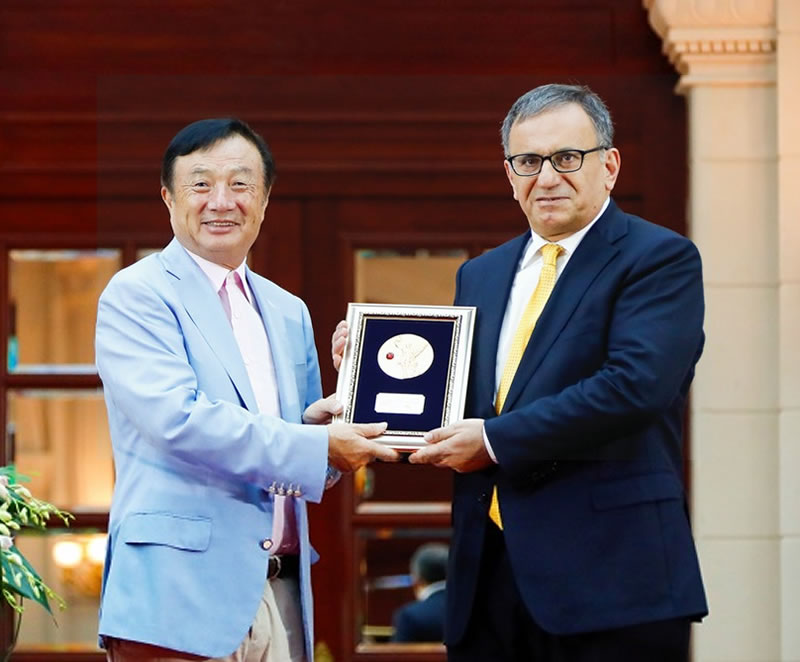 After receiving the medal, Professor Arikan delivered an acceptance speech. “I am honored to be here today receiving this award,” he said. “It gives me pleasure to acknowledge that, without the vision and technical contributions of Huawei directors and engineers, polar codes would not have made it from lab to a standard in less than 10 years. And as engineers, there is no greater reward than seeing our ideas turn into reality.”

Huawei Rotating Chairman Eric Xu also spoke at the event: “5G standards are the result of a worldwide effort to drive progress in basic research and wireless communications technology. For these standards to take shape, it took more than 10 years of hard work from tens of thousands of scientists and engineers, along with dozens of companies around the world. We would like to express our sincere gratitude to Professor Arikan, as well as his peers in academia, fellow scientists, and Huawei employees who have all contributed to 5G.”

In 2010, Huawei recognized the potential in polar codes to optimize channel coding technology, so the company invested in further research to build on Professor Arikan’s work. Through years of focused effort, the company has made multiple breakthroughs in core polar code technology, helping polar codes move beyond the realm of academic research and see the light of day.

“The birth of 5G standards is only the beginning of a new journey,” Xu added. “We will continue to work hard to ensure that 5G technology – including polar codes – creates greater value for society, and sooner. At the same time, we hope that the close collaboration between companies and the academia, like the one between Huawei and Professor Arikan, will continue, and give rise to more scientific marvels that drive the development of the ICT industry and society as a whole.”

At the awards ceremony, Huawei also honored more than 100 of its in-house scientists for their work on basic research and standards. In particular, the company wanted to recognize their successful research in 5G New Radio and their eight groundbreaking innovations, including new waveforms and new coding schemes. These scientists worked closely with industry partners to verify key technologies and drive the standardization process, making an important contribution to 3GPP’s 5G Release 15 standards.

Thanks to their pioneering work, Huawei was the first company in the world to complete 5G testing for all phases of IMT-2020 development (a collectively held vision, set by the International Telecommunication Union, for mobile network evolution by the year 2020), with results that far outperformed the key indicators for all three 5G usage scenarios defined by the International Telecommunication Union – enhanced Mobile Broadband (eMBB), Ultra-Reliable and Low-Latency Communications (URLLC), and massive Machine-Type Communications (mMTC).

As a major contributor to 5G standards, and a core patent holder, Huawei is committed to following the FRAND principle for all patent licensing. That means Fair, Reasonable, and Non-discriminatory patent licensing – a principle that the company has adhered to in the past, and will continue to adhere to moving forward. Huawei aims to build a robust 5G ecosystem together with other players.

Strong R&D investment has been a core focus at Huawei for years, investing nearly CNY400 billion in R&D over the past decade. Moving forward, Huawei will increase investment in basic research by earmarking 20% to 30% of its annual US$15-20 billion R&D budget to basic research alone.

Next: Huawei Launches HCNA-AI to Bridge the Talent Gap in the Industry