Xu Wenwei said, “Huawei has long invested in the Internet of Vehicles (IoV), putting emphasis on connections and information and communications technology (ICT) infrastructure. We do not monetize data, nor develop or operate apps. Huawei has positioned itself as a facilitating role in the development of IoV and intelligent digital transportation. Together with customers and partners, Huawei is committed to building an inclusive and multi-beneficial IoV ecosystem spanning different industries.” 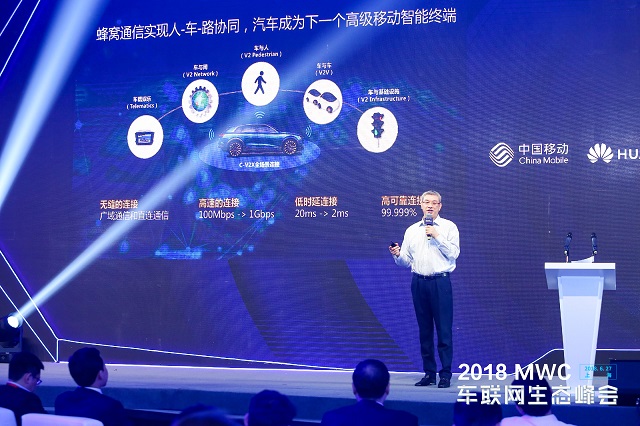 In view of development of the global industry, Mr. Xu called for unified technical standards and unified spectrum planning and distribution. A prosperous and harmonious cross-industry ecosystem can give rise to favorable industry polices and expedite commercial use. He also proposed that C-V2X can enable coordination among pedestrians, vehicles, and infrastructure, and turn vehicles into the next smart terminal. Meanwhile, automatic driving is also dependent on multi-lateral coordination, as it makes vehicles smarter, road infrastructure better, and transportation safer.

This is Huawei’s first C-V2X commercial product. The RSU also has other highlights. It takes the lead in supporting communication encryption over the Uu and PC5 interfaces to ensure safe communications; wired and wireless access modes are used to flexibly connect road facilities such as signal controllers, facilitating project deployment; and the RSU also supports Global Positioning Systems (GPS) and China’s BeiDou Navigation Satellite System (BDS). Additionally, owing to the RSU, the latency over PC5 is less than 20 ms, and the PC5 supports 20 MHz bandwidth of the 5.9 GHz frequency band, which is a frequency band deployed by most countries for Intelligent Transportation System.

Next: Huawei and Audi Sign Memorandum of Understanding for Strategic Cooperation